In regards to the New Year, Benjamin Franklin said, “Be at war with your vices, at peace with your neighbors, and let every new year find you a better man.”

However, good ol’ Ben also tried to tenderize a turkey through electrocution, and ended up electrifying himself, so I can’t say that every one of his plans, suggestions or pieces of wisdom were 100% solid.

I’m more of a fan of the Mark Twain and Oscar Wilde school of thought.  Mark Twain said of New Year’s Day that it was “the accepted time to make your regular annual good resolutions. Next week you can begin paving hell with them as usual.” And Mr. Wilde? Well, he essentially followed in the same vein and stated plainly, “Good resolutions are simply checks that men draw on a bank where they have no account.”

In essence, New Year’s can be looked at in many ways.

My personal highlights of 2010, the few that occurred, were all film related. The TCM Film Festival was amazing. The Reel Thing Conference in Hollywood and the AMIA/IASA Conference in Philadephia were unbelievable. In the spirit of that, I will celebrate that with a list of my favorite films of the year. In general, I feel that “top 10/25/etc” lists are slightly on the silly end of things and they almost shout “Look at me! Look what I watch! YOU should watch this stuff too!” And some people’s lists are exactly that. My list is not intended to be so. Maybe you’ll find something you’ll like or want to watch, but if not, no big deal. As I am on the path to trying to become an archivist, this is more for me to remember the films that I enjoyed in a particular year than anything else. So…welcome to my Filmic Forum of 2010.

-There is no order of ones I liked best to least based on numerical value, except for #1-3. Those are self-explanatory. Aside from those, I loved them all equally.

-This list is also based upon the films I’ve seen. I have not yet seen Blue Valentine, Dogtooth, Rabbit Hole, White Material, or I Love You Philip Morris (all films I want very much to see).

-The starred ones at the end are kinda my “special selections.” The ones without stars are the definite ones, without any qualms. The last 2 are quite good films, but not my very favorites.

The Girl With The Dragon Tattoo 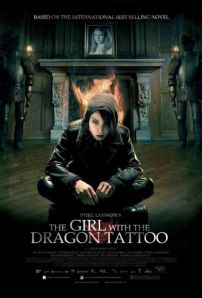 All I can say is that with the new Malick film coming out this year, and a few other things that look promising, let’s hope that 2011 is a better year for American film-making than it has been. We used to be good, but I’m losing my faith. This year’s list has quite a large amount of foreign work on it, and it seems like that is where the bravery, creativity and good film-making is going.

In any case, have a great new year, and hope your holidays were great!