On February 9, I traipsed down to my local movie theater, The New Beverly Cinema, notebook in hand, excitement in heart. There was a double feature of two films that I had never seen in my favorite genre: film noir. At first, I thought I had seen This Gun for Hire, but as the film opened, I realized that I hadn’t. The opening sequence is so very memorable that there is no way I could have forgotten that!

Double your pleasure, double your fun at the New Beverly!

The beginning, in a San Francisco flophouse, made me think it was going to be a San Francisco noir (always fun! Who doesn’t enjoy seeing shots of Fisherman’s Wharf in the ’40’s?). But I was dead wrong. After Alan Ladd has an entertaining and violent run-in with a maid, tender moments with a kitten and a handicapped child, and commits the crime that the narrative of the film is based, the plot, like Ladd’s fate, heads south to Los Angeles.

These geographic locations, while endemic and indeed fundamental to the film noir genre, were my first clues that there might have been some “work done” on the original material. The opening credits are superimposed upon a leather-bound edition of the book with the author’s name prominently featured: Graham Greene. My familiarity with Mr. Greene first came as it did with many other people who I know through the film The Third Man. Although the stars of that film were as American as apple pie, the film is as British as tea and crumpets. Knowing this, having Veronica Lake utter massive pieces of dialogue at Alan Ladd about being an American patriot struck me as more than a little bit odd.

So I did what I normally do in this case: a bit o’ research. What I found was that, indeed, it was just as I thought: the source material had been tampered with, but for quite fascinating reasons. I am someone who loves to look into adaptations. I have written and spoken about them, and think that finding out the “story behind the story” is always fun- it’s the olive in my martini. This film was greenlit, essentially, after two things occurred. Most importantly, crime fiction had become an excellent area for the studios to develop scripts from. They were striking gold left and right in that arena. In addition, Graham Greene’s position within the literary community had achieved some notoriety.  This Gun for Hire, purchased by Paramount in 1936, was only developed as a script in 1942, after Warner’s remake of The Maltese Falcon did quite well. It was clear that This Gun could be risked at this point. And it was a good risk.

The original title of Greene’s work was A Gun for Sale, but published in the US as This Gun for Hire. But the title was not the only thing that they changed. Alan Ladd’s villainous character, Raven, is supposed to be hare-lipped and quite disfigured according to the literature. Up on the big screen, however, it became a bad wrist due to some nasty child abuse, thus bringing up both Freudian issues and incurring more sympathy for Ladd’s anti-hero/villain.

However, none of this is quite as intriguing as the political alterations that were made. The writers of the film, as keenly noted by Rose Capp, “embellished Greene’s left-leaning political thriller with some definitively American elements, not the least of which was the incorporation of prevailing American propagandist sentiments…Tellingly, the American script also transforms Greene’s wealthy industrialist Sir Marcus into a monstrous figure of capitalist corruption.” Not that big of a deal, right? That happened fairly often. It was 1942. It was wartime. Pumping a bit more propaganda in there was no big deal.  What I noticed that was a big deal was the person who put all of this together: Albert Maltz. Maltz was one of the Hollywood Ten.

12 Dec 1947, Los Angeles, California, USA --- Cited for Contempt. Los Angeles: Nine of Ten Hollywood writers, directors, and producers cited for contempt of Congress, await fingerprinting in the U.S. Marshall's Office after they surrendered. They are (left to right), Robert Scott, Edward Dmytryk, Samuel Ornitz, Lester Cole, Herbert Biberman, Albert Maltz, Alvah Bessie, John Lawson, and Ring Lardner, Jr. Dalton Trumbo is scheduled to appear shortly. These are the men who refused to state whether or not they are Communists when questioned by the House Un-American Activities Committee in Washington recently. --- Image by © Bettmann/CORBIS

This Gun for Hire is the first thing on his list of credits, but…there is something unusual about the way that the material was translated. The “gung-ho spirit” was strange and forced. It seemed misplaced, even for a genre and a time that centered upon a certain amount of patriotic “umph.” When Veronica Lake makes her plea to Alan Ladd’s character to “do it for the cause” of America, it still seems that “the lady doth protest too much.” There is also something very significant in the main villain, Brewster. He is, as Capp points out, a figure of Capitalist corruption. Was Maltz still able to keep his (and Greene’s) voice within the material? As many of us know, the Hollywood Ten were not un-Patriotic. But they were critical of certain elements of the system that made it unlivable for the everyday man, much as Greene was. We may never know the answers to these questions, but watching the film, I did find this element fascinating.

The next film up was The Glass Key. Someone had tweeted on the New Beverly twitter feed that those who were going should look for similarities between this film and Miller’s Crossing. Being a HUGE fan of that film, I was even more excited to see The Glass Key than I had been in the first place. As the credits went up, the first thing I noticed was that, similar to This Gun for Hire, it was ALSO a film based on a book. So I was quite intrigued to see the transition from Dashiell Hammett to Coen Brothers and everything in between! To write that I was stunned is an understatement. There is more than a passing similarity.

When discussing Miller’s Crossing in his book, More Than Night, James Naremore notes that “the Coen brothers mix together ideas from The Glass Key, Red Harvest, and The Maltese Falcon, all the while carefully avoiding direct quotation from the novels. Although their film involves a certain amount of burlesque, it is in one sense deeply true to the imaginative world created by Hammett.” (Naremore, 214) Admittedly, I have not read all the originating source material, but I cannot help but feel that Naremore’s analysis is correct. When you watch Miller’s Crossing, it has elements of Falcon as well as Key but done in such a way that it falls into a category of films that I have dubbed Cinematic Cover Songs. The basic theory behind this holds that what we love about a good cover song is that it maintains the tune (thus we have recognition) but it spins it in an entirely new way so that we can enjoy it as though it were a new piece of media entirely. Thus Miller’s Crossing from the Dashiell Hammett literature as well as, I would argue, the films made from that material.

The Glass Key is a bit complicated, material-wise. The Alan Ladd-Veronica Lake film from 1942 was not the first film adaptation. In fact, the first time this Hammett-penned story hit the silver screen was when Paramount filmed it in 1935. It was a property that had been owned since 1931, but due to the now heavily-enforced Production code, it had been going back and forth in order to deal with the more “unsavory” elements within the script; in particular, the corruption within government figures and authority figures.  This version of the film, was directed by Frank Tuttle (who also directed This Gun for Hire, by the way), starred George Raft and Edward Arnold, and didn’t seem to garner as much critical acclaim as its sibling film from 1942. James Naremore noted that it stayed closer to the Warner Gangster cycle of films, but made major alterations to the plot and characters in order to make nice with the Production Code Administration. (Naremore, 57) 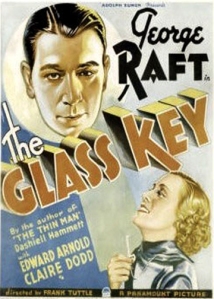 The first Glass Key was left alone and would have probably stayed exactly how it was, a somewhat minor film, remembered only for being a Hammett adaptation and for having PCA issues. However, due to the same film/literature adaptation gold rush that gave This Gun for Hire a shot, Key was given another life. With the success of  1941’s Maltese Falcon (a piece that had two previous versions in its own right- the 1931 film of the same name and 1936’s Satan Met a Lady), Hollywood decided that perhaps Hammett’s writing had finally come of age, and they would try it again. Thus they remade Glass Key. Of course, Alan Ladd had just come off of This Gun for Hire. He had been remarkably successful in that breakout role as Raven, and his chemistry with Veronica Lake was undeniable, so they snatched him up, paired the two of them up again, and the rest, as they say, is history.

All in all, it was a great night at the movies, I would say. Two brilliant films with some fascinating connections. But noir is like that. Misty, murky and secretive. Gotta walk down that alley, talk to the detective, chat up the girl, do the research. Never know what you’ll find…