Christopher Trumbo died today. And that saddens me greatly. As I sit here, tap-tap-tapping away at my computer, I have Johnny Got His Gun on in the background. Not only does it remind me of why I am here and why I became interested in the film world in the first place, but it also reminds me of why I became passionate about political issues, and where the two collided.

In the early ’90’s, when people were obsessively concerned about heavy metal music turning kids suicidal or into massive drug-fiends, heavy metal music was very busy turning me into a history buff and a cinephile. See, in 1988 Metallica released an album called …And Justice For All, which included a song called “One.” I didn’t get my grubby little adolescent paws on it until a few years later when I was hip-deep in the penny loafers and uniform skirt of an all-girls Catholic school (needless to say, being a metal fan in that location earned me more than a few detentions-that and the fact that I wore black nail polish on a regular basis). But I purchased …And Justice because I was a big Metallica fan and I had seen the video for “One” on MTV, most likely on Headbanger’s Ball with Riki Rachtman. When I saw that video, my life changed forever.

As many people are in their early teen years, I was a complete jerk to my parents. However, I had some presence of mind and enough brain cell capacity to reach out to my mother (who is exceptionally awesome) and tell her all about this video I had seen. I had also done my research in the academic journals of the time (Metal Edge, Circus, Hit Parader, and especially RIP) to find out more about this phenomenal piece of work. “One” seemed different to me. The sentiment was strange (ie outwardly political, and liberal at that!), the video structure was unusual…the entire assemblage was ground-breaking in my eyes.

The conclusions to my research were good and bad: the film was unavailable to be rented. The book however? My awesome mother got it for me. I ate it up like pie.

Johnny Got His Gun was my gateway drug. I became obsessed. I decided to find out all about the man who wrote the book, and all about the movie, and I quickly did so. I may have been the only underage kid who was spending time (without my parents’ consent or knowledge, of course!) outside Gazzari’s trying to get a date by talking about the blacklist and literary activities of Dalton Trumbo and how that tied into heavy metal. To this day, I am very thankful that approach never worked!

Due to the fact that the internet was not what it is now, it was not until I got to college that this obsession continued in full effect. As I began my film career, I renewed my interest in the subject when I was taking a film history course. To me, the Hollywood Blacklist was one of the most horrifying and awful marks on the industry that we’ve had. I could write for hours and hours simply on that but this is about the Trumbos.

In college, not only did I find that my own family had ties to the Blacklist, but I wrote several pieces exploring the ways that it brutalized people’s souls. At the end of the day, what I found was that Dalton Trumbo, the man who had started this whole journey and catalyzed my interest in this section of American filmic history was a man who, as his son Christopher Trumbo said, “wasn’t able to break the blacklist, to smash it into pieces or obliterate it or crumple it up into a ball and throw it in the trash can — but he was able to cripple it, and when his name appeared on the screen when ‘Spartacus’ and ‘Exodus’ opened within a few months of each other in New York, it became easier for other writers to get their names on what they had written without having to sign statements about what their political beliefs currently were or what they had been in the past or needing to justify themselves to their employers about anything at all.”

Dalton Trumbo's mugshot, prisoner #7551, upon being jailed for "Un-American Activities"

Trumbo’s “crippling” of the Blacklist served a great purpose and essentially opened the employment floodgates so that a great many people who had previously been economically and professionally cowed by this terrible tragedy were no longer handicapped in that regard. Dalton Trumbo, to me, was a hero. He had been a hero to me since I had first read about him as a teen, and he became even more of one as I read further. 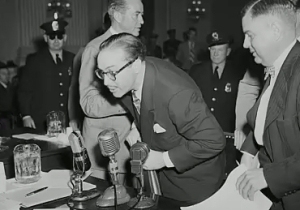 The blacklist was a time of evil, and that no one on either side who survived it came through untouched by evil.

I believe that it was with the introduction of the Blacklist to my life that I realized the importance of the writing community to Hollywood, as a good portion of those that were Blacklisted (and almost all of the Hollywood Ten) were, in fact, writers. It was also at this point that I started visually “collecting” blacklisted writers’ and artists works, Trumbo being foremost on that list.

One of the first films Dalton Trumbo's name ever was allowed to be attached to, "breaking" the Blacklist 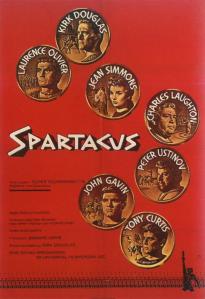 Kirk Douglas, by insisting that Dalton Trumbo be allowed on the set (and then putting his name on the film), essentially helped catalyze the "breaking" of the Blacklist

Life can never cage a man like this! And it never could...a great film of Trumbo's and very telling.

Tonight I returned home from the movies to the tragic news. Christopher Trumbo, Dalton Trumbo’s son, had passed away at the age of 70. My heart sank. A few weeks ago, I had snuggled myself up with some cross-stitch and blankets, and put on one of the best documentaries I have seen in many years, and (I will stress this) it was not just because of the subject matter.

In 2003, Christopher wrote a play called Trumbo: Red, White and Blacklisted. Directed by Peter Askin, this piece constructed a narrative about the Blacklist and Trumbo’s life based on his correspondence. It played off-Broadway, and had an intense amount of star-power attached to it at different points. In 2007, this became the basis for the documentary, Trumbo.

Trumbo is not only an excellent documentary, but it is a fabulous example of theater put onto film. It not only shows the talent that Dalton Trumbo himself had, but the skill that Christopher possessed in being able to communicate his father through two different mediums (theater and film) that were so thoroughly enmeshed on the screen. Christopher also adds an even deeper layer. Alongside the aforementioned play/film marriage, there are interviews scattered throughout, reminding us that this is not only players recreating correspondence, but real figures recalling real events. The Trumbo family as well as other Hollywood Ten families are contained within the text, relating their own lives with Dalton, while figures like Liam Neeson and Nathan Lane are reading the letters and playing their “parts” so to speak. There are also interesting connections. Kirk Douglas, a very significant figure in Dalton’s life is an interviewee, while his son is a participant in the performance/dramatic readings.

The following clip is one of my favorite sections from the documentary. But there are oh-so-many more!!

Not that Christopher didn’t have his own separate career. He did! Aside from being the assistant director and associate producer on Johnny Got His Gun and assistant director on Exodus, directly out of college, he also had a long and successful career in television (shows such as Falcon Crest, Quincy, Ironside). Christopher Trumbo was widely considered to be, as Peter Askin said, ” a very smart, funny, articulate guy. He was enormously gifted himself, and with the work he did in respect to his father.”

He was indeed his father’s son. He became one of the preeminent scholars on the Blacklist, devoting much of his life to being as learned about the subject as he possibly could. His sister, Nikola, noted that “His passion for the last 20 years or more was to learn as much as he could about the blacklist and then educate others about it, and I think he went about it using each of those attributes.”

Trumbo once wrote that making the film version of Johnny Got His Gun was his father’s response to the insanity of Viet Nam. It is tragic now that we don’t have anyone as poetic or striking as either Dalton or his son to make such bold and original filmic statements about the way of the world. Rewatching JGHG tonight, it reaffirmed my love for Dalton Trumbo, and my feeling that there is some writing talent that, like Haley’s Comet, only comes around every so often. With Christopher’s passing, and my recent viewing of his documentary, my heart breaks even moreso, as there is also one less historian who was Really There, and can talk about what it was Really Like to live through that kind of persecution.

I suppose that all we can do now is all we have ever done: watch, remember, and never forget.

I know that nothing can happen if I remain silent and that everything becomes possible when people find each other and take each other’s hand. I know that when enough of us are able to put aside our fears and find courage in the name and power of our common humanity, that when we do that one by one and then another and another, again and again, every day and day after day that we will become a great and irresistible multitude and that this war will end.