See Shutter Island. No really, see it. Look at it. Physically. And listen. Carefully. To everything that they are saying because as much as this is a fiction film, it kinda isn’t. To all of the folks who called this film Shitter Island? I’m not sure what movie you watched & I’m thinking that maybe you are possibly either a) uneducated about the mental health system’s history in this country (especially on the east coast, especially in the Massachusetts area) or b) are kinda uncomfortable with it or c) both. Now I am willing to admit that the film had many storylines going on at one time, which could seem…jumbled, and mixed some things together a great deal, but I think….that might have been the point. See the film through, and you will know what I mean.

Back to my main point: this is a film in a long line of films about mental illness and institutionalization that serves a purpose- historicizing something that needed it. BADLY. See, Shutter Island, while based upon author Dennis Lehane’s sightings of Long Island (yes, there is one in Boston) as a child, is actually based upon occurrences that took place within the walls of Danvers State Hospital, located in Danvers, MA. 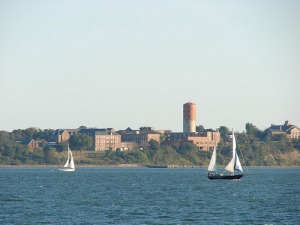 The “real” Shutter Island: Long Island has been a chronic disease hospital, “home for the indigent” and current location of several social service programs since the 1880’s. Up until the 1950’s, when a bridge was built, this island was only accessible by ferry. 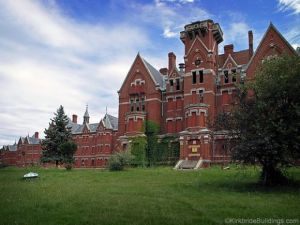 Rumored to be the birthplace of the lobotomy, that was simply one of the larger hypes surrounding the locale. The lobotomy procedure was researched and developed in wholly other locations. Danvers itself was built in 1878 and considered to be one of the sites of some of the most horrific psychiatric “treatments” in history, regardless of their “no restraints” policy for the patients. While reporting to house about 600 patients at maximum, the hospital ended up housing 2400 (after only building a few extensions). Danvers was closed in 1992, and reopened again as “Avalon Apartments” in 2006. Yes, you too can pay rent to live on the site of horrible torture!! –Photograph of Danvers c/o http://www.kirkbridebuildings.com

See Danvers wasn’t just a mental institution, it was a mental institution that believed it was truly “groundbreaking” both in its philosophies and in its actions. While I can’t argue that the idea of having no restraints on your patients was a pretty big deal for a mental health industry that was incredibly ass-backwards in the first place, I can say, without any compulsion that torture and abuse would probably go on my list of “um, no, not really groundbreaking.” I dunno. Call me crazy.

See, what happened is actually pretty sad. The original superintendent, Dr. Thomas Story Kirkbride, for whom the main initial buildings were named for, really *did* want to change the world of modern psychiatry. Quick sidenote: if you want to see a great site on the Kirkbride Buildings, please check out the site from whence the above photograph of the Danvers Building site came from! Its truly incredible! Very informative and gorgeous photos! So, back to Dr. Thomas.  Serving from 1841-1883, he really believed in providing a beautiful environment where the peaceful setting would pacify the mind, and that the proper care and respect given to patients would help them in their rehabilitation or at least in their everyday survival.

Kirkbride was one of many who were adopting a new system based on ideas of moral treatment, a concept and an approach to the mentally ill that had developed over the years that essentially said: Oh, you know how we used to think that you loony guys were animals and stuff and just lock you up and throw food at ya? Oops! We screwed up…Uh, this lady called Dorothea Dix came and yelled at us last night and we, uh, learned something….

Kirkbride ended up establishing what is known as the Kirkbride Plan, which is a type of architectural plan that has been used in asylums all over the US, and it was created in order to give patients a bit more privacy and a decent amount more dignity as well. This was used in the design of Danvers. However, these nice architecture and moral treatment plans, as wonderful as they were,  did not prevent the  nightmare that was to come.

The door to the violent wards, at Danvers.

Due to the changes in not only in the mental health system, but economics, and patient density, Danvers State Hospital, once a proud institution of progressive methodologies and compassionate care became a site of terror and human destruction. Michael Ramseur, an expert on the history of Danvers and its lurid details discusses what he has discovered in terms of what Albert Deutsch,  a journalist who worked for social reform especially in the case of the mentally ill, wrote as part of his book, “Shame of the States.” Ramseur states that some of the photographs that Deutsch published were very close to what he had seen at Danvers. As Ramseur notes, “In these photographs, I saw the same deteriorated spaces as at Danvers…only as opposed to the abandoned spaces I had been drawing at Danvers, these spaces were full of patients, patients who were haggard and ghostly, often peering blankly into space but sometimes staring penetratingly into the camera. Poorly clothed and sometimes naked, these legions of lost souls were shown pacing aimlessly on the wards, lying on the filthy cement floors or sitting head-in-hand against the pock-marked wall.” (www.ramseursdanversstatehospital.com)

As time moved forward, away from the hippie-dippie “let’s take care of people by making everything look pretty” vibe, mental health professionals discovered psychosurgery. And- wait- the party’s just getting started- they discovered fun little neuroleptics like chlorpromazine aka Thorazine, and for a real jazzy start-’em-up good time, they found Electroconvulsive therapy and Insulin shock therapy. Of course, this all coincided with the fact that more folks were being stuffed in asylums all the time because hey- you’re gay? ASYLUM. You’re politically transgressive? ASYLUM. You’ve been a bad wife aka you’re seriously fucking depressed about your life/being in a submissive/nothing role and the feminist movement is about 25 years away? ASYLUM. So…yes, along with Mary Lee who is a paranoid schizophrenic and talks to several voices on an hourly basis, Joe Schmoe gets socked away because mum and dad caught him with another boy. Oh…and then there was a World War and its aftermath, too, wasn’t there?

WOW. Makes me kinda glad to be where I am today, know what I mean, Vern?

Shutter Island‘s biggest problem is its historical accuracy. If that is a film’s problem, then I’ll watch problematic films for the rest of my life. Everything it deals with: trauma, death, destruction, war, in/sanity, women’s issues, alcoholism…all timely issues for 1954. Scorsese’s skilled collection of one man’s journey through Shutter Island in search of a missing woman and then winding up with so-much-more deserves to be looked at in a very particular and special light.

This is no Mean Streets, this isn’t even Cape Fear. I’m sorry if that is what you thought that you were coming to see…but this film, regardless of all the moments that have no subtlety, is an extremely meticulous film, planned and executed in a way that made me…not sure if I *liked* it as much as I appreciated it and wanted to see it again. The problem with writing about this film is that it IS so meticulous and I refuse to give anything away, so I can only say this: I view this film as a tree, with deep roots and a solid body. I think that Scorsese did something very different with this film and I like that. The music was incredible, the acting/performances were SO strong, the production design beautiful, and it led me in places I didn’t know that I was going. If you felt uncomfortable, GOOD. If you felt weird about things, GOOD. And if you didn’t understand it completely? That’s ok, too. I, myself, look forward to a second viewing. I feel like this is going to turn out to be a great deal like Gangs of New York. I knew that I could appreciate it, but I wasn’t 100% on it because it made me feel…uncomfortable, I think. But I rewatched that a few nights ago and loved it…so?

This is also a Dennis Lehane story. The man behind Mystic River and Gone, Baby, Gone is probably not out to make your day a happy or comfortable one, and I’m really ok with that. Mystic River was probably my favorite movie of 2003 and I still rewatch it (although a laugh-fest it is not!). Lehane’s involvement of his Boston environs with an incredibly dynamic and detail-intensive mystery story is well done, and made me revisit the film throughout the day to see what *I* had missed (although, to be fair, some of that credit should really go to Laeta Kalogridis, the screenwriter, but it was still Lehane’s original piece. 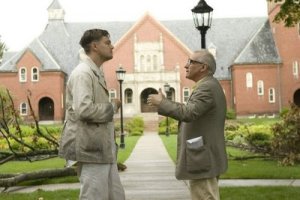 Leo & Marty get “Shuttered” away…

Shutter Island is also a very important piece in Scorsese’s works, as it does bring history to the forefront, and a history that has long been forgotten or, in the case of Danvers, paved over to make room for apartments. Archivist Kirsten Anderberg wrote an interesting piece on her research about the history of American asylums, and I think it’s worth a gander. We have a pretty gnarly history with the mentally ill and mental cruelty.

Filmically, we have shown this before, Shutter Island is not the first go. But it might be important to note that within the films that have been released and/or made, we have also seen it change history as in the case of Frederick Wiseman’s Titicut Follies (1967), a documentary made about the Bridgewater State Hospital for the criminally insane in Bridgewater, MA. The footage that was shown in this film and the abject cruelty that was put on camera may have effected at least some change, as Bridgewater changed its “force-feeding” and torturing ways…albeit not until 20 years later, after 7 patients died, and several 1st Amendment lawsuits regarding the film.

In conclusion, Shutter Island, while not a “Scorsese” film, is one to be taken seriously on a multitude of levels. It is a serious drama, a serious historical work, and a quite intelligent piece of local reflection, due to the hand (as in all of his works) of Bostonian Dennis Lehane. Scorsese should be allowed to take a day off once in a while, guys, to do a different thing. And this was a very complicated film. It should not be shrugged off or tossed aside.

Oh, and while we’re on the subject of not tossing stuff aside, I would advise all of you to check out the pictures that some folks took of the inside of Danvers State Hospital….They’re really amazing….here’s some links: