When I was at UC Santa Cruz, I did the normal school thing, but I also wrote for a film magazine called EyeCandy. It was a fun little journal, just a few of us, and I was really able to introduce folks to cinematic areas that they may not have encountered before.

While we were separated for a spell, I am glad to have “hooked up” again with writing as my primary partner. It’s a good one. While film will always be my boyfriend, writing about film makes a good life partner for me.

One of the things that came up recently around the internet was the screen test that Sam Fuller did for The Godfather part II.  When that came up, I realized that I wanted to go back and reread the article I had written for EyeCandy on Sam Fuller oh-so-many-years-back…see how it held up and IF it held up. All I remembered about that time period of my life was being very passionate about Fuller and having most other film students I knew being extraordinarily passionate about, oh, Kevin Smith or (if I was lucky) some of the more interesting queer film makers like Tod Haynes.

In any case, back in 2001, I was a one-woman-Sam-Fuller-conversion-machine. So…I wrote a silly article to try to educate people and cajole them into joining Team Fuller. Do you know HOW  many arguments I had over the naming of Short Round in Indiana Jones? Yeah, sorry boys at UC Santa Cruz in the late ’90’s/early ’00’s, SOMETIMES girls can be right about films involving your geek heroes. *ahem*

Maybe you’ve read the other stuff on here, maybe not. In any case, here is what my writing looked like back in the Spring of 2000. I have added some pictures (because I can), but otherwise, I’ve left it essentially unchanged. In a sense, I am also using this space to archive my own writing and past work. Hey man, my blog, my rules.

While I edited a little bit for grammatical errors that my own conscious could not abide with the publication of, I would hope that you would be slightly kind…I did write this 10-ish years ago. It’s not terrible, but it’s not something I would hand to Fuller himself. Aside from Billy Wilder, when people ask me who my favorite director is, I think I would have to say it’s this guy right here. When I found him in my late teens/early 20’s,I got obsessed. He uses some of my favorite actors, introduces me to new ones, screws with people’s concepts of what things should/shouldn’t be, and does what he thinks is right. His ethos is strong and, most important of all, entertaining. And as an added bonus, he has some really kick-ass women characters! So here you go. Enjoy the way I tried to introduce Santa Cruz to Sam Fuller.

I wish I could get a larger size of this, but this was the cover for one of the magazines. Not bad, eh?

“You can’t show war as it really is on the screen, with all the blood and gore. Perhaps it would be better if you could fire real shots over the audience’s head every night, you know, and have actual casualties in the theater.”—Sam Fuller 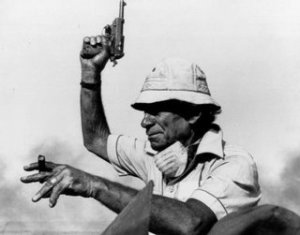 Sam Fuller was a real American. He was a reporter and he fought in the war. He was also, however, a filmmaker. Within his chosen cinematic occupation, he worked towards the portrayal of the country he killed and could have died for. He was extremely patriotic. However, Fuller’s patriotism worked in a very different way than the traditional stars-and-stripes, Fourth-of July barbecue patriotism. Sam Fuller worked to rupture America open, and show what was really inside: the contradictory situations portrayed in his films only exposed the deep-seated issues that lie within American society, but are not polite to discuss. But Fuller was not polite about it either. It has been written about Fuller that he “doesn’t flatter his audiences; he rubs our noses in our own dirt.” One could not mistake a Fuller film. He has an exceptionally unusual style of filmmaking, especially for the time.

One of the most fascinating issues about Sam Fuller is the question that comes up every time when viewing his films: How was he allowed to make that?  For the 50’s and 60’s, Fuller’s films were exceptionally radical, and decisively individual. In a time where almost everyone else was being forced to homogenize their films, Fuller was a complete anomaly. One possible explanation is that his films were primarily “B films”. As a result of that reduced budget and economized shooting schedule, that may explain why he got away with everything he got away with. As well, it must be considered that mainstream Hollywood saw “B” films to be merely secondary cinematic fodder alongside the “A-list films”, opening up opportunity for a great deal more personal expression.

A Sam Fuller film can deal with anything from pedophilia to racism, interracial romance to insanity. His stories were unique in their dealings with women, as he portrayed them as sexual free agents, as well as independent heroines who were not about to “wait around.” He utilized Asian-Americans as real and central characters within his films, instead of portraying them as ethnic stereotypes. 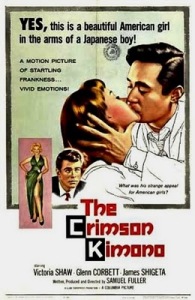 This was still a major revolutionary narrative for the time. CRIMSON KIMONO (1959)

In Crimson Kimono (1959), we can see a perfect example of the ways in which Fuller plays with racism and our own socially constructed stereotypes and expectations. The plot is that of a Japanese-American man and a Caucasian man who fought together during the war, and became inseparable friends as a result of one saving the others life. They return to the US and get an apartment together in LA and become private investigators. The twist in the film comes when they both fall in love with the same Caucasian woman, and she, in turn, falls in love with the Japanese-American man. Pretty weighty stuff for 1959! Not only does this deal with the extremely controversial topic of interracial romance, but it also is a forerunner of the ideology within Sam Fuller’s films that woman should have the same freedom sexually and romantically as men. They should be able to choose, not be chosen.

Fuller’s filmmaking style and plot development are a cinematic war being waged against the things within society that are accepted but are unacceptable. The Fuller landscape is harsh and confusing, placing emphasis upon the aspects of the world that require a more in-depth consideration, such as race, the role of women, and corruption.   It is an offensive action, striking against social mores, and traditional roles.

Fuller’s cinema is one that is overtly contradictory. But he utilizes those contradictions in order to point out the traditional concept of things not always “being as they seem.” However, Fuller’s films are anything but traditional. His characters vary from strippers and prostitutes to journalists and soldiers. The one commonality that most of his films seem to contain is the alternative portrayal of corruption. In his films it is the strippers and thieves that are ethical and good, and the policemen and other “uprights” that are morally bankrupt. This is accurate about every film he has made. In Naked Kiss(1963), it is not the prostitute who is the corrupt, evil force, it is the very paragon of society within the town, and he’s capable of some pretty nasty stuff!

Fuller is the master of irony. In Shock Corridor (1963), a film based primarily within a mental institution, the main character is a journalist who is obsessed with winning the Pulitzer prize. In order to do this, he gets himself committed in order to investigate a murder that occurred within the asylum walls. While inside, he meets the main witnesses of the crime. The first one he meets is Stuart, a young man who, in the outside world, became involved in the Communist party due to his participation in Korea. However, he was placed in the institution because he is no longer involved with Communism, and he was dishonorably discharged due to his affiliation with Communist influences so…he now thinks that he is a general in the Confederate army! 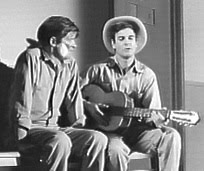 I know why I went over to the commies— ever since I was a kid my folks fed me bigotry for breakfast, and ignorance for supper.

Then he meets Trent, a young man who was one of the first people in his area to be placed into the situation of racial integration in his school.  Tragically, he cracked under the pressure. This young African-American student thinks that he is a leader in the Ku Klux Klan. 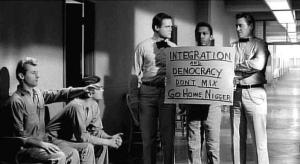 In films like Naked Kiss (1963), and China Gate (1957), Fuller gives unusual depictions of strong, independent women, who were allowed to be sexual without being punished for it, and were not ashamed of any of their actions. They took these things in stride, and never required help from a man, because they could do it by themselves. Once again, Fuller called it as he saw it, knowing that this was the “unacceptable” ideology of the time, but knowing that it was the reality of the situation.

Fuller said that camera movement, and actors’ movement was inconsequential, and “what matters is that the emotion of the audience should move…” In the end, it is really up to the viewer to let the film take its effect. His films revolve around making you think about and question realities and truths. He states that this battle is endless. At the end of a few of his films, the closing titles read “the end of this story will be written by you” or “this story has no end.” This intelligent Fuller ambiguity only serves to have the pin pulled out and the grenade thrown to you.