We’re heading into the final stretch, guys and gals. So many plans and schedules have already been posted (mine is forthcoming, I swear)! The slow trickle of #TCMFF pals into my Hollywood hometown and everyone’s excitement is (as usual) giving me such joy. I’m just giddy with Classic Film Craziness!

So aside from the Print Resource Guide that I posted a few days back, I have something else very special to add to my “preservation and restoration stream.” As one of the TCMFF Social Producers, my focus is to increase knowledge about preservation, restoration & film archiving through social media platforms. As a working archivist, I wish to showcase why I truly believe that TCMFF is one of the strongest film festival venues dedicated to these critical procedures. 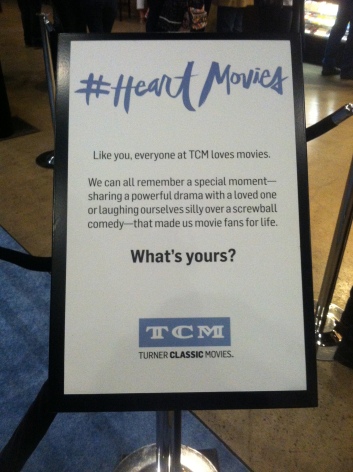 One of my favorite parts from TCMFF 2015 – an entire booth dedicated to cinephilia and why we, as film lovers, “heart movies”! So great!

For this blog, I got a wonderful and in-depth pre-TCMFF interview from the knowledgeable Bob Furmanek of the 3D Film Archive about the restoration of GOG (Herbert L. Strock, 1954), which will be playing as the midnight show on Saturday night, April 30th at the festival! Bob will be there in person with his restoration colleague Greg Kintz, so that will be extra cool!!

Hope all of you enjoy this interview and perhaps learn a bit more about 3D preservation!

1) Can you give a short history on your relationship to this film and why it’s such a unique opportunity for TCMFF fans to be seeing it this year?

When I was living in Los Angeles and working for Jerry Lewis in the mid-1980’s, I spent a lot of time doing work in the old Technicolor building in Hollywood. Director Herbert L. Strock was still active at the time and maintained an office on the first floor. I used to visit with him quite often and naturally, we discussed GOG. At that time, it was lost in 3-D (the studio only had material on the right side) and he lamented the fact that nobody would ever see it again.  For that reason, I made it a top priority to try to find the missing left side.
I eventually discovered the lost 35mm left side print in 2001 and carefully matched it to a new 35mm right side print from MGM. We screened the dual-35mm polarized 3-D prints in 2003 at the World 3-D Film Expo at the Egyptian Theatre in Hollywood. Mr. Strock got to see it again with a sold-out audience of 700 fans and it was a wonderful moment. Sadly, he passed away in 2005.
We spent five tedious months restoring the film last year for 3-D Blu-ray release through Kino-Lorber. Our new digital master has extensive color restoration and shot by shot 3-D alignment and left/right panel-matching. As a result, the audience at TCMFF will be seeing GOG in a better presentation than was technically possible in 1954. Mr. Strock would have loved it!

TRULY exquisite examples of the restored L/R eye work can be found by clicking on this picture. It will take you to the AMAZING “before & afters”!

2) You head up the 3D Archive. Why is it important to have a 3D Archive? Isn’t 3D still coming out?

Nearly every 3-D feature from the first forty years of stereoscopic cinema (1922 – 1962) was photographed and printed on dual-strips of 35mm film with one print representing the left side and the other representing the right. They were projected theatrically on two 35mm machines in precise synchronization. Polaroid filters in each projection port – and the corresponding polarized glasses worn by the audience – insured that each eye only saw the intended side in order to create a 3-D image. If either the left or right elements are missing, you have lost the film in 3-D. Since the early 1980’s, the Archive has worked very hard to ensure that most of them survive.
There were fifty Golden Age (1952-1955) domestic 3-D features and thankfully, forty-eight survive in their complete stereoscopic versions. The only lost 3-D features from that period are TOP BANANA with Phil Silvers and one half of SOUTHWEST PASSAGE with Rod Cameron. 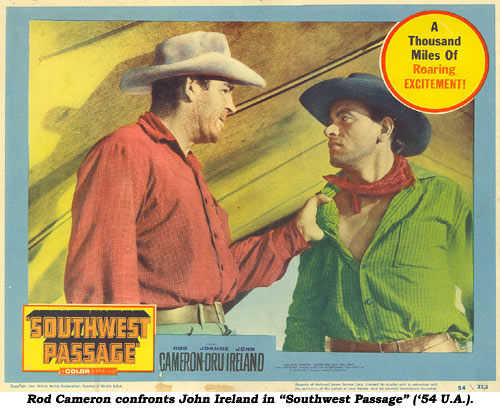 We are doing our very best to get as many released onto 3-D Blu-ray as possible so that people can see these films as they were originally intended. It’s been quite an obstacle and uphill battle securing licenses from the copyright holders but we don’t give up easily.

Right out of the gate, the workload is doubled and that presents many challenges with respect to time and financial resources. You basically have to restore the film twice. The most challenging aspect is ensuring that both left/right sides are perfectly aligned and panel-matched in order to present the best possible viewing experience. That means going through the film and making adjustments on every single shot. It’s very time-consuming and labor intensive but it’s absolutely crucial that both the left and right sides are matched.
On the average, we can restore a 3-D feature in three months: GOG took five. It was an enormous challenge because the left side was completely faded with no yellow or cyan information whatsoever. In addition, every single shot in the film required up to seven levels of correction including color restoration, left/right panel matching, flicker reduction, image stabilization, detail extraction from the superior right side element, stereoscopic vertical alignment and dirt/damage clean-up. Greg Kintz has literally worked a restoration miracle in bringing this 3-D gem back to life.

GOG had a rather complicated history so far as lab work and processing. It was filmed on Eastman color negative 5248 (25 ASA tungsten) and processed by the Color Corporation of America laboratory – formerly SuperCinecolor/Cinecolor – in Burbank. By time it was edited and ready for theatrical release in May 1954, the lab was in financial trouble and had been sold to Benjamin Smith and Associates, owners of the Houston Fearless Corp. As a result, the 35mm release prints of GOG were made by Pathé Laboratories in Hollywood. While some early Eastman color negative stock holds up pretty well if it has been stored properly, the 1954 Pathé color release prints were already faded within a few years after it was released.
Thankfully, the right side element used in the restoration (a 35mm inter-positive struck from the original camera negative) still had quite a bit of color. With a little finesse, we were able to tweak it digitally to bring back its original palette. The biggest challenge was then matching the faded left side with the right.

5) Without any spoilers, can you give us a scene to look for that was *especially* challenging in the process but your team thinks came out particularly well?

To be honest, there wasn’t one particular scene that was more difficult than others. The entire film was an incredible challenge! When Greg Kintz was doing his work and sending me 3-D Blu-ray test discs, I was constantly amazed at the restoration and how the image kept improving with each new level of correction. Additional dirt and damage clean-up was then done by Thad Komorowski and that helped immensely.
To give you an idea of what we achieved on a shoestring budget, Warner Bros. spent close to $300K restoring HOUSE OF WAX. We brought in the 3-D and color restoration of GOG for $10K.
After suffering through flat, black and white 16mm open-matte full-frame transfers on TV for decades, I never expected GOG to look as good as it does today. We’re very proud of the final result in bringing this lost 3-D classic back to life.

6) What are you particularly looking forward to seeing at the TCMFF?

Boy, that’s a tough question. The entire schedule is wonderful and there are many cinematic treasures to be enjoyed.
For me personally, the new restoration from the 35mm nitrate camera negative of FRANKENSTEIN MEETS THE WOLFMAN (Roy William Neill, 1943) is going to be quite a treat. That’s been a favorite of mine since I was a young Monster Kid in the 1960’s and watched New York TV’s Chiller Theater on Saturday nights. I even had the three-minute Castle Films 8mm fifty-foot home movie edition. It’s going to be great fun seeing it fully restored on the big screen!

Thanks again so much, Bob!!! Can’t wait for this screening!

It’s been a pleasure Ariel, thank you!