Yeah, totally completely late. But my last film *will* get up before it’s 2012, even if it is after Xmas and a bit after Chanukah.

Before anyone bitches about how cheesy this film is, I usually watch it as a double feature with my first choice of this series, Black Christmas. It’s a lovely way to put the yin in the yang and give a kick to the sauce, so to speak.

Before you try, there is no talking me out of WHITE CHRISTMAS. First of all, there is Danny Kaye. I have a tiny little altar dedicated in my soul to that man that was erected as a small child when my parents gave me the Hans Christian Andersen (Charles Vidor, 1952) record and I memorized that. Additionally, I watched the film with a regularity matched only by with how much I watched The Court Jester (Melvin Frank, Norman Panama, 1956). In short, I watched the films and played those records a lot. Yes, I’m a Kaye-o-holic.

The next thing about this film is that it’s a musical. I’m a musical junkie. Rogers & Hammerstein. Tommy by The Who. They all work for me. I love the singing, the dancing, all of it. But there is nowhere better to be fully entertained than in the old movie musicals where people could REALLY sing and dance. Could you imagine if today’s stars had to have the same kind of training in order to become famous that Kathryn Greyson or Judy Garland did? Exactly. We wouldn’t have so many complete failures and the output would be better. Not that I have an opinion about the subject or anything. But to act, sing, and dance…I love it. People now seem to think it’s “cheesy.” I think that they don’t know what they’re missing. Please pass me the Singin’ in the Rain (Stanley Donen, Gene Kelly, 1952). 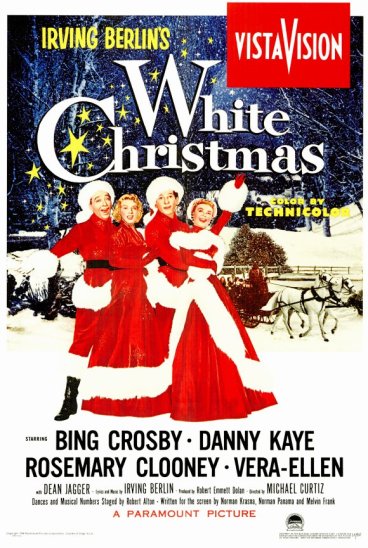 Finally, there’s the Michael Curtiz thing. I never knew this until I was much older and an educated cinephile, but the director was Michael Curtiz. Hello! UH, Mildred Pierce (1945)! The Adventures of Robin Hood with Errol Flynn (1938), Angels with Dirty Faces (1938), and, of course, everyone’s favorite Casablanca (1942)! So…ya know, it’s not like they just had some hack doing the film.

In any case, one last point I want to make about this film and why I love it. I have to say this at least once a day when I’m out with friends and someone looks up, grimaces a bit, and *oh no* admits to liking something that may not be so popular. They say, “Oh, this is my guilty pleasure.” And everyone nods, laughs, and it gets them off the “hook.”

I will state, as my last statement of 2011, that I adamantly do not believe in guilty pleasures. If you find pleasure in it, you should not feel guilty about it and you should never let anyone ever make you feel guilty about liking it. I like this movie. I like it proudly. And I always will. It’s probably my favorite Christmas movie, it probably always will be, and I don’t care who knows it. See, guilt takes away from some of your pride and pleasure; makes you feel bad about what you like. I don’t believe that you should feel bad about art or media. It’s the antithesis of what it is there for.

And with that, I bid you adieu for the New Year, stay safe, stay well, and see more films!