Last week I read an article that was being shuffled around my social media circles about the “death of the film camera.”

While I’ll admit I was saddened, I can’t say that I was shocked. I watched as the article made its way, slowly but surely, through all of my friends’ Twitterfeeds and Facebook pages. I considered the fact that a year ago I would have been devastated and that this year I don’t think that this article is the sign of the apocalypse, even if I do prefer cinema that is shot on film.

As a rental company, Panavision is committed to supporting our customers worldwide by providing them a wide range of camera equipment which includes film cameras. We continue to support our fleet of film cameras, and that includes ongoing major refurbishment, which in many cases means almost a complete rebuild of existing product. There is still significant demand for film equipment in many of our key markets, including studio feature film productions. So, while our ongoing focus is the transition to future products in the digital world, the implication that we’ve quit the film business isn’t accurate.

I guess the idea is to learn and to think critically. It is also to understand that film is changing, even if it not always for (perhaps) the best.

The responses to Panavision’s statement are somewhat more fascinating than the concept that there will never be another brand-new film camera made. Clearly the lack of new cameras will not be problematic. The world is chock-full of them for rent, and, as Panavision stated, they are more than willing to make sure that said-items continue to function at top capacity. So then my question is this- what does the film camera “death” really mean to people? What does it mean to me?

There are no rules in underground cinema, only edges.--Cecil B. Demented (John Waters, 2000)

The people who reacted to Panavision’s facebook “status” were of a few types: the vultures (are you selling any cameras? I’ll buy ’em if you are!), the denial-ists (of course you’ll still support REAL film!) and the realists (this is great news for all sides). My reaction? More on the real. The digital is here and getting bigger but there is no reason to reject our foreparents. In my mind, there is no reason why it cannot all coexist. But that’s another entry.

What this is really about is a kind of nostalgia and fear that most of us cinephiles have. We react to change about as well as a Mogwai does to a midnight snack, which is to say…not very well. We hear the word “digital” associated with the cinema and, many times, it sets off a horrific panic in our system.

Let’s be honest here. How many people do you know who view modern changes to projection, prints, restoration, or filmmaking as somehow a personal attack? Realistically, this is not always the most mature or thoughtful (let alone intelligent) critical approach to a medium that you love above all things. I AM GUILTY OF THIS. But I have started to reconsider my fan-girl-esque issues as they may not come from a place of knowledge, only a place of viscera. I believe that it is when we can connect the knowledge and visceral centers that we can have well-constructed analyses.

While it may seem that I have “sold out” and the The Man “got me” that is wholly untrue. I am just as much of a True Believer as ever, only in a different, more centered way. I cannot let nostalgia and personal engagement take precedence over certain elements of the filmic world due to the fact that I do love it so very much. I am in training to become an archivist, and while I completely disagree with one of my professors that Carolee Schneemann‘s work could be digitized and maintain its integrity and meaning, I have come to understand that the digital does have its place and space.

Do I understand the issues involved with why all the theaters have gone digital with the exception of the wonderful New Beverly Cinema, and 2 or 3 others? Yep. I do. Do I like it? No, I don’t. This is one of the areas that I know has nothing to do with nostalgia: I just like sitting in the dark with other people and watching movies on real film. And I do wish that more studios would be sympathetic to the few theaters that still participate in this semi-arcane practice, at this point. Don’t just suggest that we play a Blu-Ray. I know Blu-Rays look REALLY nice, but…they don’t have the visual warmth. Especially with an audience. Realistically, I am totally willing to take base scratches on a print over the pristine cold of a Blu-Ray if I’ve got film fans around me. Movies are always 50% about what’s on the screen and 50% about who’s looking at the screen for me.

But the film world is this marvelously organic breathing changing thing. It always has been. I expect it always will be. To expect it to stay the same is to desire stagnation. The methods we use to tell our stories change. The ways we communicate our film discussions change. We change. I suppose we cannot realistically get any angrier at the technologies now than when sound came in. It was a rocky beginning, but who knows? Maybe in a few years? 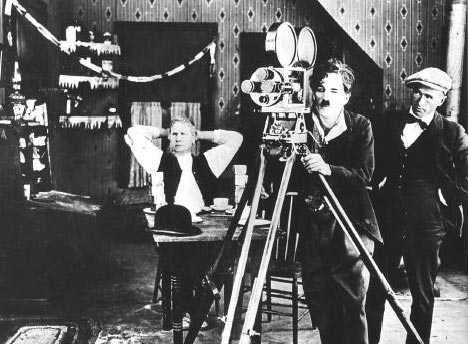 That said, my patience only goes so far. This would have to be where I draw the line: I am exceedingly impatient at anyone in the younger generation (or current generation, for that matter) that uses their phone in a movie theater. To text, to call, to take a picture/screen cap of the screen, any of that. That is the one thing that drives me completely up the wall, and I will NEVER be able to tolerate that change in our world and I find that aspect of technology exceedingly tiresome. I do not have the ability to cope with that and I’m ok with that Area of Crankiness.

I do not believe that the death of the film camera means the death of film itself. I have also started to come to terms with the fact that film is heading in a very different direction than it ever has before and I am looking forward to becoming part of that world and making sure that a strong bridge between the old and the new is maintained. I think what will be key to this maintenance will be the formulation of a mutually beneficial structure amongst all the cinefiles. I’m not entirely sure that is possible, as cinefiles are amongst the most opinionated, obsessive and fan-culture-iffic folks I’ve ever met, but I believe it is worth a try and I certainly plan on doing my part.