Y’know, traveling is a fun AND a funny thing.

You get to have all KINDS of experiences. ESPECIALLY on holidays.

Especially on HOLIDAYS in FOREIGN COUNTRIES.

So St. Patrick’s Day has a long and involved history, right? Involving religion, and snakes, and all sorts of fun stuff. But to a few 20-21 year old kids going to college in the UK, well, it was……about going to St. Patrick’s Day in Ireland. Not so much about historical pretense. Even if we were well educated individuals who actually did (and still do) care a great deal about the ways in which theology and history intersect to create ritualistic celebration. However, one must admit- it’s changed quite a bit from St. Patrick and his Snakes, no?

I was with my Partner in Crime, my Ultimate Traveling Companion, the girl I met at school in the UK who hailed from Wisconsin. What *is* it about Wisconsin??? Constantly meeting awesomely people from there. Must be in the custard or the brats.

At any rate, there we were.

We’d hit the pubs, drank the Guiness, seen the madness, and were ready to call it a night.

…only we couldn’t. And funny thing? Neither could the folks we came with.

See it was almost comedic. I do say ALMOST. It was quite like those movies where you watch in horror as the people disperse into disastrous chaos and simply laugh. And why do we laugh? Because we know, according to filmic convention, that, in the end, It Will All Be Just Fine.

This didn’t seem like one of those movies when we were standing on the street, freezing our asses off, and all the bars were closing at about midnight or 1am. Yeah. That’s what we thought too. A bit early.

See, Ireland gets super cold at night and…..we were c.o.l.d.

I admit- our planning was POOR, at best. We, um, well….were gonna wait until the bus station opened at 6am, then leave. BUT, we were hoping that there would be stuff going on until at *least* 2, and then? Well, we hoped we could find a diner or something

Oh, the stupidity of youth. However, that stupidity makes for GREAT storytelling. Eventually. Once the hypothermia wears off.

I have images of our somewhat inebriated compatriots waiting for the bus or taxis back to the hostel in County Cork (a good WAYS off). We kept passing them, as we searched for somewhere to hang out for a few hours. And no, it wasn’t pretty.

It looked like the damned zombie apocalypse was coming, because we weren’t the only bad planners. There were a whole bunch more, only………they were SERIOUSLY drunk and my friend and I? Well, we were actually only pleasantly celebrational. Like, as in, we could stand, walk, ENJOY ourselves.

However, we were caught up in the rest of the folks banging on hotel doors to let us in for a few hours of respite.

And we kept passing our poor friends who were still waiting for the cabs.

Finally, exhausted, after a few more mishaps, we just didn’t know what to do.

A kind soul took pity on us.

“The police station, “ they said, “Just go there. They won’t bother you at all. You can sit there as long as you want.”

We looked at each other in disbelief. Neither of us were, um, too keen on the idea, shall we say? However, what did we have to lose?

We headed down towards the station. And entered the next part of our adventure. 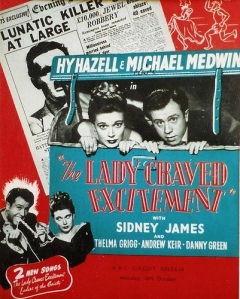 OK, so we were in the damn Dublin Police Station for St. Patrick’s Day.

Can you get much more bizarre than that? Well, yes you can. She and I sat there. Staring at the wall, shivering and wondering a) how the hell we got there in the first place, b) how the hell we were gonna stay awake until the bus station opened and c) what we would say to the nice Irish police officers, should they ask us why we just barged into the police station and sat down, without saying a word to anyone. 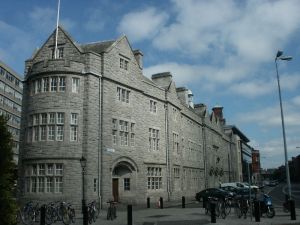 Just as we were coming to terms with our fate…….SHE came in, accompanied by another woman and two of the aforesaid Irish Police Officers (who, for the record, completely ignored us except for once, if I remember correctly, for the entirety of our “visit”). One of the women was taken back “behind the scenes,” while the other? She became our friend for the evening.

And boy oh boy, was she our friend. Aside from the nice homeless man, eating bread and listening to his walkman in the far corner, she was the only person in their with us. And we were her captive (and I DO mean captive) audience.

We nodded in agreement. Of course she was. Of course.

Then she asked us some questions, I think. Her sobriety, of course, was….less than reliable. We mostly just froze and agreed with Everything She Said. Because she Wouldn’t Stop Talking.

You think *I* talk a lot? You never met HER.

Mostly about what a good girl her friend was, and how she just “shouldna been done like tha’” of course, but she really was what my mother would call a “character.”

If you think this lasted forever, well you’d be right. IT DID.

And there wasn’t much we could do but listen to her. It’s entertaining now, but woah nelly.

At some point, she realized that as an audience we weren’t much, and started to try to figure out what to do about LEAVING.

That’s when the REAL FUN began.

She started to flip the lights on and off. She started running around the room. She started to knock on the bulletproof glass where the policeman/receptionist sat. Not only did this disturb him, but our Homeless Friend started going bonkers. He removed himself from underneath the seats, and started to be, um, not so happy with her, making sounds of protest, quite zombie-like, where he had been perfectly well behaved and just calm and walkman-listening before. Now he was ALL about the bread-chomping and pissed off at her proclivities towards flashing lights on/off and generally disturbing the peace.

The woman went a bit loopy, to say the least. At this juncture, our friend was spoken to. Firmly. By her friends, the nice police officers who had taken her friend in. They informed her in no uncertain terms that if she did not QUIT IT IMMEDIATELY, she would join her friend, the “nice gerl.”

Pouting, she sat down.

My companion and I sighed with relief as the tension left the air.

Shortly thereafter, she was escorted from the premises to meet her friend (we assume?), and it became light outside. The Dublin bus station opened, and my Partner In Crime and I removed ourselves from the freezing chairs (they left the doors open all night- it was no warmer inside the station than it was outside), and got ourselves to the airport.

So, my friends, that was my story for this St. Patrick’s Day. Hope yours is well and good! Please be careful and well, keep safe and most of all, stay outta police stations!!