Thanks to my longtime friend Bill, I get to present you with morning AMAZING.

This morning, at the asscrack of OMG-it-is-way-too-early-o’clock-in-the-morning, the nominations for the 81st Annual Academy Awards were announced. Why they announce it at such a time, I will never know. But it is a time that a very dear friend of mine has made a habit of being up for, each year. “Why do that?” one may ask, “The information is not going to change within a few hours. Why not get that extra few hours of shut-eye?” Perhaps he does it because he wants to be the first to know. His dedication to the cinema is one of the strongest I have ever known, so this would not be unthinkable. Perhaps he does it because he wants to see if his guesses were right. Perhaps he simply wants to see if the movies/actors/film stuffs that he loved so dearly during the year get recognized by the Academy of Motion Picture Arts and Sciences. Frankly, it’s probably all of these things and more. However, there is one thing that prevails above and beyond all these other things-something that speaks to me in a very similar way regarding this particular social institution- and that one thing is ritual.

I’ll tell you something about ritual.  Ritual and the cinema go together like…well, popcorn and soda?

We all have our ways of interacting with the screen, but the important thing is that we do it. In a world where Netflix is the rule and not the exception, I wish to argue for the beauty of the cinematic experience and all it entails, and not just for the visual content. It is as much part of the film as the narrative itself. I am not the first to suggest this, of course. In essays written for the seminal film journal Close Up, a quarterly published between 1927 and 1933, there was a particular concentration on the experience within the theater. In no uncertain terms, the writers in this magazine sought to underscore the consequence of the folks sitting next to you just as much as they worked to point out the influence of the actual visual stimulae.

One writer, Dorothy Richardson, even went so far as to describe the cinematic experience in religious terms. She calls the audience an “increasing congregation,” and the employees religious figures like bishops.  More importantly, she labels the interaction between said congregation and the movie screen “prayer.”  Richardson wrote that the theatrical experience was one of “universal hospitality,” welcoming anyone and everyone to come into the pews. This depiction of cinema as both communal locale and religio-cultural spawning ground only makes the ritualistic aspects of attending an actual theater to see a film even more pronounced.

Thing is, its expensive. I know that. And right now, that’s hard. But when you have places like the New Beverly Cinema, where you can get two movies for $7 most nights, and concessions even cheaper…well, its silly not to go at least every once in a while. If you’re in LA, that is. But I refuse to believe that there isn’t at least ONE theater in most places that most people could afford to go to every once in a while. Because, see, I also believe that we can’t afford not to. The minute that we start fully staying at home, the moment we lose our sense of the “universal hospitality” of a movie theater, the VERY MINUTE we forget what it’s like to be bugged by the laugh of the guy two rows over or the slurping sound of the teenagers making out behind us, or the bawdy drunks who snuck their liquor in………then we lose ourselves and we lose a piece of history. And we are stuck with Netflix. ONLY. Do you really want that?

Pardon my language, but what a boring fucking concept! Not to mention the fact that we will then lose all ability to see the brillilance of a film like the recent Let the Right One In, with its exquisite shot structure and blackest-of-black nights against whitest-of-white snow on a big screen. The experience, while still nice on a small screen, would be just that- “nice.” In a theater, with people, larger than life…its beyond incredible.

I’m not willing to part with that. Are you?

Now what does this have to do with this morning’s announcements?  Well, if nothing else, religion has a hellova lot to do with ritual. In fact, since I’m not sure where I am on the actual Higher Being issue, I think that sometimes a good cinematic experience can be just as spiritual to me as a good night in synagogue, since I feel drawn to both in a very deep way. But to a certain extent, that could also be considered cultural. But that’s neither here nor there. Back to Oscar.

Oscar is a holiday for me. And more than that, it’s a ritual. I have preparations. I have guacamole. I spend the day getting ready, watching the red carpet, getting all prepared. Like it was some weird form of Christmas. It’s like my Superbowl. My Personal Day.  And I DO like to celebrate it

So many people I know “don’t believe in awards shows, man, they’re such a pile of crap.”

And you know what? Sometimes, um, they’re not the best. Ellen kinda sucked as a host. But remember this? 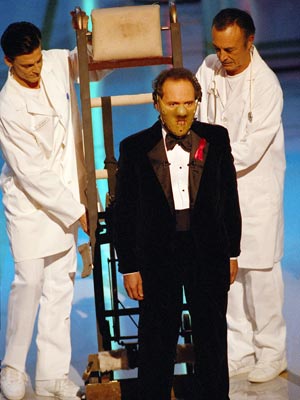 You can’t tell me that that wasn’t AWESOME.  I mean…can you? Honestly?

So while I’m aware (or have been told) that “award shows don’t really mean anything” and that the industry is JUST THAT- an industry, I still love the show and it means something to me. I grew up with my Grandmother voting on the damned things. First time I saw a lot of movies was through screeners that we got. OK, ok,  so I saw Naked when I was a little too young, but I got the Footloose and Flashdance soundtracks on vinyl, when they used to send out vinyl!

All of the above terms would apply to my experience with film, I believe, and what place Oscar has in my life. This will be the first year that I can remember where I have seen practically every film nominated (for most categories, too) on a big screen.  That fact alone makes this year extraordinary. Clearly, this is more than slightly due to my amazing housemate Cathie, but even so…good job me!

So you don’t have to get up at 5:30 in the morning to find out if Mickey Rourke got nominated for The Wrestler if you don’t want to, and you don’t have to even watch the awards. And, to be perfectly honest, I’m not certain how I feel about the Hugh Jackman-host thing. But I would implore you to do one thing- think about the fact that for the last 81 years we have been celebrating what the industry has considered the Best of the Best of what the Big Time Cinematic Industry has produced.It may not all be good, it may not even be passable at times, but its an interesting reflection of where we are and where we’ve been.  And that ritual, in and of itself, is worth at least a few moments of your time.