From the very opening of Grace, I had a feeling that it might be a slightly different kind of film. With its very delicate and feminine visuals and sounds, it opens as a film that is very much in accordance to what ends up being the subject matter: maternalism and child-rearing.  However, as it is indeed a horror movie, the light and airy features of these opening shots and the camera drifting languidly over Jordan Ladd’s recumbent naked form seem remarkably eerie when the promos so very clearly advertise death and something “unnatural.” 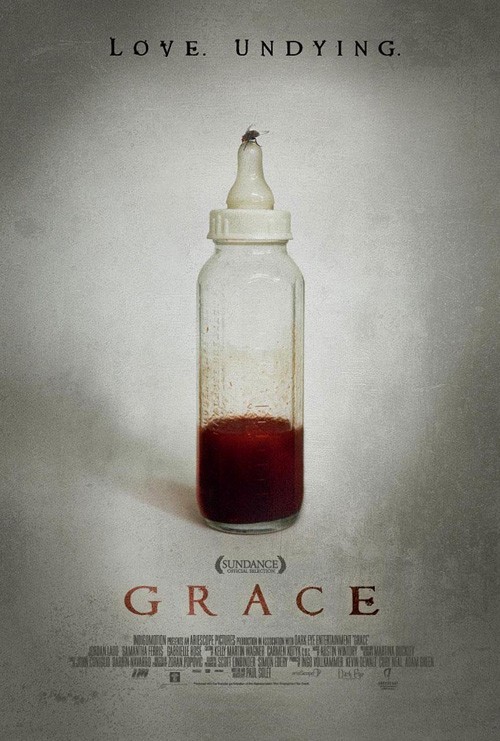 Throughout the film, what is “natural” seems to be a running theme, which I found to be quite interesting. At first, since there were so many discussions about health food, midwifery and non-traditional health methodologies in general, I initially took the film to be making a critique of all these kinds of hyper-liberal vegetarian/vegan sensibilities. However, I then realized Grace had much deeper-seated and smarter thematics then that. See, ANYONE can take a horror film and chuck in a few “Oh, check out the seitan-eating, soy-milk drinkin’, edamame chompin’ folks!” jokes. That’s simple. Put a few of those in, then have them be the first to suffer and/or die, and *presto*!!  Instant laughs from the horror community!  Hell, I’d probably laugh…if they were funny! But it takes a pretty special film to take these issues and involve them into a deeper seated narrative that discusses mother issues and what is natural to being a mother. It also was pretty impressive to me, as a female, that there was a male director who was able to hit on as many issues as he did in this film without it feeling in any way, shape or form invasive, exploitative or disgusting.

This was a horror movie. No doubt about it. But it was very sophisticated and brought a great many women’s issues to the forefront, whether intentionally or not. To a woman like me, who digs on women’s issues? I found that pretty exciting.

So let’s get my problems with the film out of the way first: the lesbian shit. There was one character who had a jealousy issue and…the actress wasn’t my fave and the lesbian jealousy weirdness angle is…a bit played out in my opinion. HOWEVER, it was done with a bit more class than normal, and I’m not sure if I could see another route to take if they were gonna have that involved, and it sorta was part of the story, so…I guess it was alright. I really do wish that there could have been a different way that the narrative could have gone without using the age-old (and somewhat tired) old college-relationship between 2 women that comes back as a central figure within the film, but…hey- it didn’t distract me SO much that I didn’t like the movie. It was the ONLY thing that I had ANY problem with and to say that? That’s pretty awesome. It means that this is a pretty damn good film.

On to the good stuff: EVERYTHING ELSE. This movie has tension coming out of every pore of celluloid. When we stayed for the Q&A, the composer discussed some of the aural reasonings why and I thought that those reasons ALONE were incredible. Turns out that Austin Wintory recorded actual baby cries and then mixed them into the music that he composed for the film. The reasoning for this, he said, beyond the actual sound which increased tension in and of itself, is that the pitch of a baby’s cry is the one sound that every human can hear (well, unless you’re deaf, I suppose), no matter what. Scientifically, he reported, the sound is at such a level that your body will respond to that sound in a way that it does not respond to anything else in the world. Indeed, I would say, this does seem to make sense, as somehow we can ALWAYS seem to hear babies crying whether we want to or not. Wintory used the example of being on an airplane and being able to hear a child in the very back of the plane and yet having it sound like the infant was right in your face. Ever been there? Thought so. At any rate, I am a huge sucker for music in film, and THIS FILM had it, and I will say that Wintory’s intermingling of baby sounds with the rest of his lullaby-esque tunes as well as the other scoring was incredible. A good score/good music can make or break a horror movie for me. Would Halloween have been the same without that tune? Psycho? Exactly. So…well done, Mr. Wintory, good addition!

On to the story now…Within the horror film genre, we have seen some pretty interesting mother figures,  have we not? 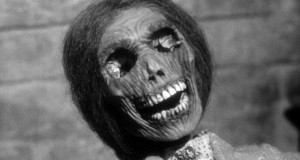 Norman tried to please you, Mrs. Bates, he really did!

Dude, Mrs. Voorhees, we get it. We would've been pissed if Jason was our kid, too.

The mothers represented within Grace bring forth a whole new kind of mothering to the horror world that I feel has begun within the last few years, and I last saw represented within the astonishingly fantastic French film, Inside. It seems to me that there has always been a certain amount of fascination with the mother figure within the world of horror. Clearly, as shown above, that figure has not always been the figure of protection in, um, the most positive manner, shall we say? Now within films like Grace and Inside I feel like we may have turned a corner. I’m wondering, since men made BOTH of these films, if there hasn’t been a certain change within the way that these directors have come to synthesize the maternal representatives within the slasher genres at large, as well as other horror cinema venues. It seems that, with these films, we are starting to witness a kind of sea change that, frankly, is ALL TOO WELCOME.

Fuckin’ A, do I love a good horror movie. Slashing, hacking, blood, guts. You name it? I love it. I ADORE GORE. But I’m not one of those people who loves without discrimination. I *am* particular. But what I love, I do love very much. And I am extremely fascinated by this new turn in the world of horror. It seems that for years and years we have had a certain set of (for lack of a better term) Horror “Family” Values, many of which have been covered by academics such as Carol J. Clover, Barbara Creed, Harry Benshoff, just to name a precious few (as there are *so* many goodies!). These Horror Family Values have very stringent ideologies in regards to sexuality and motherhood. Essentially, in a horror movie, if you fuck, you’ll die and if you’re a mom, you’re a crazy homicidal bitch with no redeeming qualities whatsoever, emphasis  on the crazy, if-you-please. While I think we’re still all waiting for a film where kids can safely orgasm and survive past the post-coital beer (if they even get that far before a knife/axe/murdering-object-of-choice rips through their young nubile flesh), the Mother Issue seems to be making a change.

I hate spoilers, EVEN in reviews, so I’m not going to give anything away. But I will go so far as to say that starting in the film Inside and now continuing on with the film Grace, I’m seeing an evolution in the depiction of motherhood in horror which I quite like. While I could attempt to use some of my Freudian feminist film scholarship stuffs on this, I’m not sure I want to at this juncture. My feelings about this transition probably need more fodder in order for that kind of highly formulated (and quite possibly extensively boring to many) discussion on Sigmund and where he’s at today. I’d probably use the ol’ Virginia Slims adage, “You’ve Come a Long Way, Baby.”  I think that the concept that we are no longer treating the mother figure with anger and exposing her to the kind of harsh negativity within the horror film that we have been doing for YEARS is a big step.

It could definitely be argued that both of the mothers seen in Grace have elements of Teh Crazy in them, and Have Issues. However, on the whole, I feel that their portrayals actually have a kind of yin/yang sensibility to them, and do more for exploring female mother issues and issues of loss and attachment. And to say that there are characters in a horror movie that are explored with class and sensitivity is a pretty bold statement, but it must be said. This is a very mature film, and comes with high recommendations from me.

So, here’s to ya, boys. Its fascinating to see that it took a few young men to promote women and motherhood within the horror world. I like it. I like it a lot. I hope to see more people do it. It has actually brought the calibre of the horror film UP, significantly, which, in my eyes is DREADFULLY needed sometimes! End points? If you haven’t seen Inside, holy shit- SEE IT!!! And if you haven’t seen Grace? WELL, what’re you waiting for?

See ya in the front row!

One thought on “Mother Knows Best”