Disclaimer: I will have you know that I hate the word “bromance.” I hate it with the burning heat of a thousand fires. That said, as a writer and a pop culture participant, I will retain the use of the damn word in my title as it has become part of popular language and is firmly recognized to mean the exact type of relationship which I wish to discuss within this piece. Thus, for brevity and, in truth, more for ease, I’ll use the word…. I still abhor it though.

Now, I cannot say that I was introduced to anything new and different with Anvil. But that does not mean it’s a bad film, by any means. It’s GREAT. I just know how these documentaries (and rock’n’roll stories) go. They’ve been around for 30 years, never got the recognition they deserved, still busting ass to *try* to get *something* out of the dream. The main difference with this band is that these guys toured with big names a billion years ago, yet never made it while their peers did, yet they stuck it out. IN CANADA. 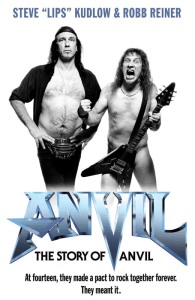 In a way, it reminded me a bit of American Movie, only…not as depressing (I find that film to be a wee bit depressing. Many find it funny, but my sense of humor is often weird and picky like that…). I felt that Anvil afforded more dignity to the individuals represented in the film and there was rarely a sense of “making fun” of them, even when it came to bits where the band (and their songs and notions) were clearly beyond the pale of normalcy. In a time where it seems like everywhere you look things are chock full o’ snark, this was quite refreshing.

But…they are still Spinal Tap in their own way. However, looking at the ad campaign, they seem to be pretty aware of their stature in this whole engagement, and, as they say repeatedly (with a genuine zeal rarely heard anywhere I might add) they just want to rock.

So…….at the end of the day? Fantastic movie. We had a great time. Why the title? Because this film got me thinking. A LOT. About metal. And guys. And guys’ relationships with each other. And how metal is the catalyst, the solder, the very cornerstone, for some of the most intimate and tender, loving and loyal relationships between men I have ever encountered in my life.

I had this boyfriend once. Metal guy. Amazing vocalist. He was totally the guy I dreamed about dating when I 13 and hanging out on Hollywood blvd. at the rock shops by day, and surreptitiously on the Sunset Strip by night. Only I met this guy when I was in my 20’s, and in grad school, so it was a little late for me to be whisked off my cowboy-boot-clad-feet into the sunset. No matter, he was my Metal Boyfriend. Super hot, long hair, tattoos, the whole nine yards.

At any rate, we were together for quite some time. Practically living together. But he had this friend, from back in the “old days” of Hollywood, and this friend had since moved away, but they still talked. A lot. And even if they hadn’t talked, every story involved  this person. They had clearly spent a GREAT deal of time together and it meant something very very significant. Now, when they did talk, they watched football together or talked music, or things like that. But they still did it together. It always struck me as one of the most beautiful things I had ever come across, actually, to see my significant other who was very much not someone you would gauge as vulnerable by any stretch of the imagination, having this fantastic relationship with his Best Friend, across state lines. I absolutely loved it. I wanted to meet his friend SO bad. But we broke up and that was never to occur.

What does my ex-boyfriend have to do with Anvil? Well, everything, I’m afraid. You see, it’s sheer METAL BROTHERHOOD, as the band Manowar might say….

Upon this coupling, this “bromance” if you will, a certain sovereignty is given to that relationship above and beyond all others. And the most fascinating part of this whole dynamic is that everyone else gets it and goes by it. Married? Well, your wife’ll know that she’s second best to your BFF. Because, the bottom line is, it’s not personal.

It’s a slippery slope and quite tricky but the bonding that these men do with their chosen male partner is so exceptional and unusual that it is like a marriage of a different sort altogether. So one might say that these men are both gay and poly-amorous at the same time, but that would be quite silly.

But society gives creedence to the relationships that women have with each other over those that they have with the men in their lives. It is one of the few things that we do get, undeniably, as women (although we do periodically get teased about that too, so perhaps not completely without strings attached…). So men should not get these relationships?

At any rate, I’m not really here to discuss the dynamic between the way society treats men’s and women’s relationships, but the relationships that men form themselves.

For some extremely ODD reason (to me, anyway) it seems to be that heavy metal/hard rock brings out these relationships. I will give you 5 prominent examples, some fictional, some real,  that show the kind of “bromance” of which I speak, each one more intense than the next.

In each of these examples, you have real or imagined relationships between male rock characters that not only overstep the boundaries of what would be essentially seen as an acceptable “friendship” level but also border upon intimacies that mirror those of a romantical nature. We all know that Rock’n’Roll and sexuality are conjoined twins, but these relationships only go that extra step in making it a little bit more substantial.

Wayne & Garth’s relationship in Wayne’s World, while being entirely fictitious, is also parodic and based upon an entire generation of kids who were just like these characters. So, while humorous, this structure was also demonstative of a larger part of young male rock culture and young male social culture. It was, in fact, a perfect recreation of how they related to their media, their peers and themselves. But what is most important to be gleaned from all this, was that unlike many other subcultures that strove to isolate  and drive wedges in between people, supporting their right to be an “individual” and all that, metal and rock fostered a kind of community, albeit almost solely male. 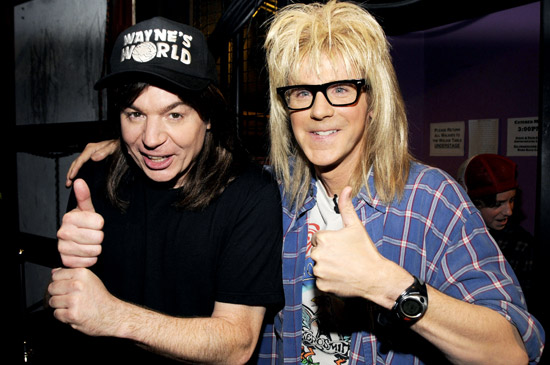 So in Anvil, when “Lips” says that if they don’t make it this time he’ll jump off a cliff, it only makes sense that his partner and bandmate, Robb, states simply, “No you won’t.” Lips then looks at Robb quizzically, and Robb just shrugs and says, “You won’t jump off the cliff cuz I’ll stop ya.”  As though it were nothing. Like Lips had asked him to pass the salt. It is that much a part of his being.

Realistically, the way that a band structures itself is not unlike that of a familial structure anyway, so it is not beyond reason that the key figures might play the roles of the paired-off/romantic leads. Even when there is infighting, it is always more painful to watch that infighting go on between the key players because you know that there is more love, more loyalty and more at stake in THAT relationship than in any other relationship in the band.

We all would be much more concerned if we heard that Mick and Keith were on the outs than if Mick and Ronnie Wood had a conflict.  And each time that Joe and Steven from Aerosmith have had issues? Well, we know that it has effected not only the band but the musical output, and even their solo work isn’t as much of a force to be reckoned with as it is when it is a full band. But these are just examples. Some out of many. You can take any number of such examples out of the rock world and do the same.

The point is  the relationships are there. There is a certain magic that comes to exist between two men that spend an inordinate amount of time together in all sorts of ways. This magic mirrors the romantic magic that comes to exist within the most deep, intimate relationships that you can ever have based on the kinds of things that these men share: creativity, life experiences, hardships, success, drive, ambitions, dreams, and, most of all, time.  One might argue that these relationships could exist anywhere, but I would argue against that. I would say that the ones that exist within rock music and certain time periods/genres and mentalities (as evidenced by the examples I have given previous) make these ones quite unusual.

Male relationships are, in and of themselves, strange beasts. So, too, is heavy metal music in all of its variants and especially its variants on sexuality and masculinity. However, the fact that we can find some of the most pure and tender, loyal and true relationships within that musical arena is fascinating and quite satisfying, to say the least, in a genre that many times supposes itself to be devoid of emotion and focused solely on carnal desires.

2 thoughts on “Forged in Fire: Heavy Metal and the Male “Bromance””