A few days ago I was on Facebook, and I noticed that a friend of mine had posted a pictorial with some words accompanying it and it was getting quite a buzz. Due to the fact that I have a tendency to keep my eyes and ears open for issues having to do with gender and identity within the cinema, this one caught my glance in particular. 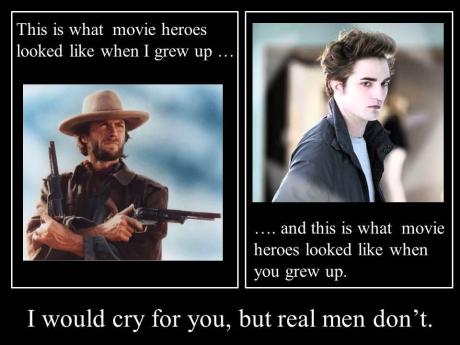 At first, I was amused. But I realized that I was amused at the comments, not the picture. In fact, the more I thought about this, the more highly problematic I found it to be.

The male body is an injured body.  We have seen this played out time and time again. Internal damage becomes externalized in the form of the action, horror and thriller genres. Really, it happens in any film where extensive physical damage is known to take place to the male character(s).

“Hey, aren’t you a feminist?” you ask. “why be so concerned about this stuff? Is the male body any of your business?”

First of all, I am most unreservedly a feminist. And secondly, one of the things that makes me a feminist is my overarching concern with how the cinema fails both sexes, as feminism is not just about women and it never has been.

If you wanna get down to the nitty gritty differences in how this works, the harsh lens of the camera eye tends to sexualize the bodies of women while men’s bodies are physically attacked. Now I’m not saying that women aren’t injured or torn to ribbons. Look at Aliens (1986). However, Vasquez and Ripley were some tough-ass chicks, so that’s going to have to fall into “exception-not-rule” territory. What I’m saying is, on a general basis, what we find in cinema is that the female body is over-sexualized to our great disadvantage and the male body is damaged and physically traumatized beyond what is reasonable.

The male body does not feel real, does not feel whole until they are committed to the screen and the narrative as unwhole, taken apart, bloodied. We cannot properly swallow masculinity as authentic unless it has been made to withstand something physically and most likely emotionally.

Bruce Willis as John McClane in Die Hard- barefoot, bleeding, and hanging over a building. Oh, and did we mention it's Christmas?

Clint Eastwood as Josey Wales, a man who loses his wife and children to violence and never returns psychologically.

Where does this put our conceptions of the masculine ideal? Not in a very good spot, I’m afraid.

We are a gender-damaged culture that scoffs at the “manliness” of Robert Pattinson when compared to Clint Eastwood based upon heroism and tears.  Surely we could find something more intelligent, more reasonable, to criticize the film about other than the manliness of a tough rugged cowboy archetype versus a brooding sparkly vampire!

In addition, I submit that we all need to truly reconsider our notions of what is a “real man” anyways. While I’ll readily admit to being a fan of Charles Bukowski’s literature , love Lee Marvin with every bone in my body

and cannot seem to get enough of Sam Peckinpah’s cinematic delights,

I feel that a certain culture has arisen that has built a shrine to these men (and ones like them), and I’m not sure it’s for the right reasons. These are men who, in celebrating their own masculinity, produced a world of the hyper-masculine. So much so, that at times it would not be beyond reason to step back and ask, “Are you trying to convince me, or are you trying to convince you?” Within these men lies a mixture of pain and sexuality raging so very strong that it can only come out in one way: aggression.

Is this what we would like to consider our “reality”? Pain and darkness?

Here is my question: why don’t we celebrate Jack Lemmon? Is he too much of a “wimp” in the compare/contrast game? Is it just like in The Apartment (1961), where he can only win by a dark default? And is that really winning?

We call Cary Grant “dashing,” but is he a real man? Well, maybe. He did get chased down by a airplane and hang off Mount Rushmore. 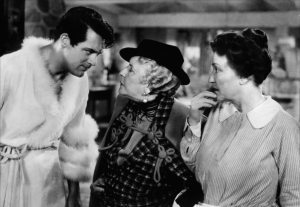 And back on the vampire tip, are YOU going to inform Christopher Lee that he doesn’t get to join because he played a bloodsucker for years and years or is Hammer “cool” enough to make it count?

Christopher Lee gets bitey with it...

As we vacillate between the poles of masculinity, looking at what is a real man and what isn’t, it stands to reason that we have some serious decisions to make involving some changes in perspective. I think that it is high time that we make them.

Where does this put our conceptions of the masculine ideal? Not in a very good spot, I’m afraid.

3 thoughts on “Don’t Cry For Me, Argentina: Cinema and the “Real Man””