And I remember thinking: Hackman and Pacino did a movie together?? What???
So that story ends in a rather anti-climactic manner. I never watched the VHS. In fact, I no longer have the damn thing.
But I’m so glad. You can only lose your Movie Virginity for a film once and theatrically is the best way to do it.
This is the second time I’ve written on this screening. It had a heavy impact on me.
The first time, I wrote about ELECTRA GLIDE IN BLUE for the film noir blogathon. This night was one of the best film memories/screenings of my life. And considering how many movies I’ve seen….THAT’S saying something.
Retracing my steps to 5 years ago. I had originally had plans for the night but they fell through so I did what any normal, red-blooded, cinematically-charged girl would do: I biked over to the LA County Museum of Art and attended the series that I had (sadly) missed most of, entitled “True Grit: The Golden Age of Road Movies.” I had no idea that there was a guest that night. I was there to see these rare films that never screen. And I was really excited about SCARECROW. I knew nothing about it- was it a comedy? Drama? Thriller? Somewhere in between? I had intentionally done no exhaustive research on it because I wanted to go in fresh. To be fair, even now it is rare to find people who are that familiar with the film, even though I feel it is top quality, desert-island material.
My time-memory is not perfect, but considering that the photo I took of my ticket says the double-feature began at 5:00pm, I think that it would make sense that our man Vilmos took the stage post-double feature.
I could lie and say that I was highly educated on the man’s career. But why? I wasn’t. It was more educational and beautiful to be introduced to him in this manner.
It would be absolutely fair, however, to say that yours truly had a decent idea of who he was. While I couldn’t name any film titles off the top of my head, I had seen many by that time.  Mostly, I knew that there was this wonderful bearded signatory of the cinematographic community being welcomed gloriously to the stage, and…I just wanted to give him a hug. He beamed from ear to ear and I’m still not sure if I breathed during the Q&A or just smiled dumbly like I was high on drugs. Vilmos was infectious!!
He laughed and enjoyed the questions and discussion, thought it was funny that people were in such awe of his work. He shrugged so many times. “We just did it,” was his approach. A very classical no-nonsense approach.
He smiled, shook his head, told stories. He thought the whole thing was a gas.
All the things that he spoke about that night, I now treasure- as a professional in the film industry, as an archivist, preservationist, historian and film lover.
He spoke about coming to this country and working with Lazslo Kovacs, and how their relationship and Hungarian”ness” really added a new flavor to what was going on in film at the time. 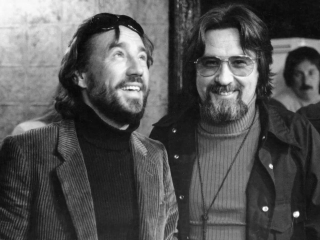 He even spoke about working on THE SADIST (James Landis, 1963) a little bit, where he was billed as William Zsigmond. This was pretty thrilling to me because I really love this film.

Vilmos was allowed to talk, mostly uninterrupted, about certain technical and narrative aspects of SCARECROW that he was involved in.
The film relied quite a bit on improvisation (not always a cinematographer’s friend) and yet Zsigmond rolled with it, going so far as to call this work one of the “better of my films.” Even though he admitted that it was quite dark- content-wise and visually, matching many European films at the time as far as lighting went.
An audience member asked about an opening scene in which there were tumbleweeds rolling by as Pacino and Hackman stand at opposite sides of the road. Was this planned out? Did they choreograph the tumbleweeds? Vilmos just laughed. “They were tumbleweeds! They were around. They do what those things do.” No, Virginia, there were no tumbleweed wranglers.
Vilmos Zsigmond spoke about the way the film was shot and their “cinemobile.” He said it was dreadfully hot inside the car and while it was certainly a communal experience, it was a learning opportunity and tough.
I felt like I was going to film school just listening to him reminisce. But it wasn’t in a sad-nostalgia way or “tough-guy-walk-up-the-hill-in-the-snow” way. He treated the audience as though we were friends.
Debra Levine quotes Zsigmond in her review of the evening‘s double feature at LACMA:

[Scarecrow] was a real road movie, made on a very low-budget, $800,000. We went to Bakersfield, we had to shoot in sequence. We were on the road. We sent someone ahead to find locations. There were no sets in the film. We used motel rooms and bars. We had a cinemobile [bus] that held everything, actors, equipment, crew. We had unusual crew, the smallest I ever saw, camera, gaffer, key grip, sound man, dolly man, boom operator. Everyone was helping; the driver of the cinemobile was pulling cables. We were traveling every day. At the beginning, in L.A., we went through the script and agreed on what we were doing. We settled in Denver, but we had no time to rehearse. [On the road] we had no time for rehearsal.

Vilmos Zsigmond’s eyes sparkled as he spoke, he had passion in his voice and love for his art. But he was a relaxed and centered guy. I never met him one-on-one, but I met his movies. I met him that night when I saw him speak about the film that I have now had the privilege to see twice on a big screen- once at LACMA and once at the Turner Classic Film Festival (TCMFF).

When you love what you do and you live for what you do, it’s hard to keep it inside. You exude that joy and dedication. That is the only way I can adequately describe Vilmos Zsigmond. He is so inspiring in that sense. Although he has passed away, he will always be inspiring in that regard. This is a man who filmed the Hungarian Revolution in 1956, escaped his homeland, and then shot films as diverse as HORROR OF THE BLOOD MONSTERS (Al Adamson, 1970), BLOW OUT (Brian DePalma, 1981) and REAL GENIUS (Martha Coolidge, 1985).
Aside from SCARECROW (obviously), I’m a sucker for BLOW OUT (Brian DePalma, 1981), THE LONG GOODBYE (Robert Altman, 1973), and MCCABE AND MRS. MILLER (Robert Altman, 1971). I consider these films to be part of my family. I will certainly admit to playing favorites on SCARECROW and BLOW OUT, however.
Tonight I will be watching SUMMER CHILDREN (James Bruner, 1965), another film that Zsigmond was credited on as “William Zsigmond” and lit by his pal, Laslo Kovacs. I’m looking forward to it. I’ve never seen it. There is very little written on it and I may pursue this more.
Wish I could see it in a theater, but them’s the brakes.
From what I have found, this film is another interesting addition to his oeuvre. It has been labeled “neo-noir” and American New Wave and all sorts of things. I’m excited because it features Catalina Island- one of my favorite places on the planet. 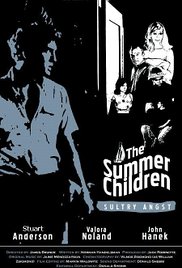 I would like to do some more in-depth research on it (especially as to the actual restoration process) but my brief look came up with a reasonable synopsis.
It was thought to be a lost film (although it was finished) but elements (including original camera negatives) were found in the early 2000’s and sound elements were located in other vaults. Apparently (as it goes in a case like this, from my understanding) a restoration was completed using a combination of the best elements that they located from all of these vaults over time, and Zsigmond assisted on the creation of the final product, getting it back to some estimation of what it was to look like.
If you have Amazon Prime, you can watch this tonight as well. I’m greatly looking forward to it.
I consider myself lucky to have been so warmly gifted with his laughter and stories for one night. I am also lucky because I will be able to have his films forever. While I absolutely am not a binary “digital or film or die!” person, I will say this about Zsigmond: he knew how to use the format of film. And I hope that those working with digital instruments today will take that under consideration and experiment, perhaps, with film while it is still around because there is something different there. Not better, not worse, simply different. And it is what digital is based upon. And cinematographers like Haskell Wexler and Vilmos Zsigmond built that machine. Let us try not to hire the wrecking ball too soon, eh?